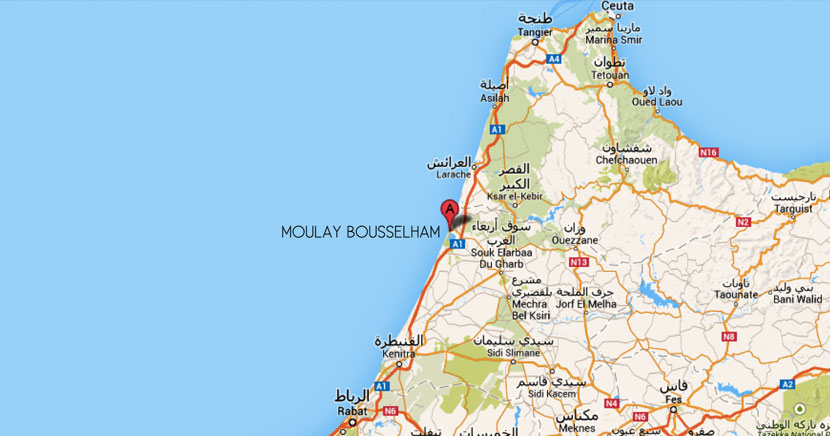 Moulay Bousselham is a big fishing, farming and holidays village, located between Tanger and Rabat.

A traditional village of white and blue houses, bordered by the Atlantic and by the Merja lagoon, one of the wildest and most beautiful nature reserve of Morocco.

There are around 5.000 people living in Moulay Bousselham all year round, and many more when people from Casablanca, Rabat, Tanger, Moroccans from abroad and European tourists come to enjoy the reasonably warm climate, cooled by the trade winds. They find vast beaches and a local gastronomy based on the best vegetables of Morocco and of all the riches from the ocean.

Moulay Bousselham is one hour from Tanger or Rabat by the highway. It is a magical spot of rest, calm and natural beauties at the heart of the north of Morocco, between the sea and the Rif mountains, where hospitality and kindness fit into the ancient heritage

A typical village, a seaside village, between the lagoon inhabited by thousands of birds and endless beaches where surfers and idleness-lovers meet and have fun in a joyful oriental atmosphere.

Thanks to its proximity to Tanger and Rabat airports, Moulay Bousselham offers a great opportunity of rejuvenation, relaxation and romanticism for all the Morocco and sea lovers, in a simple, warm and natural atmosphere.

Moulay Bousselham is at crossroads of the North of Morocco, an often unknown region but which is living a boom thanks to the King’s influence.

The village is located at equidistance from Tanger and Rabat, on the Atlantic coast.

Tanger has a rich History and a unique Geography. The beauty of the site and his light have been an inspiration pour generations of artists among the greatest (from Matisse to the Rolling Stonnes, from Delacroix to Paul Bowles, S. Burroughs, Jack Kerouac...).

During the 40s’ and the the 50s’, Tanger was an international zone and a paradise for all the social classes and odd people (artists, writers, millionnaires, secret agents and gamblers !!)

Today, the powerful charm of Tanger is still working... From the formerly scandalous lanes of the Petit Socco to the more than ever avant-gardist patios of the numerouscafes.

It lures every in Juliy the greatest international artists. The American painter Richard Dana, the  Japanese Mizue Sawano and others have let their marked impact by colouring the walls of the medina with sublime frescos.

Surrounded by ramparts, the capital of the Kingdom owns a significant architectural heritage which counts numerous buildings as the gates of the Kasbah of the Udayas, the mnaret of the Hassan mosque(12th century) which rises at 55 m, one of the rare vestiges of this unfinished building and, close to the city, Chellah necropolis. The city houses several museums (archeology, handcraft). But it is also a city which is evolving, with a marina, a tram, an opera...

A diversity and a wealth that allow to answer to the tastes and interests of everyone. All these destinations are easily reachable foy a day or two according to the time  and the wishes of each one.